ELECTION SPECIAL (Part 4): A 'spring stream' in your step

That was the 50th time and my throat was beginning to feel dry. By 100 I was the mirage side of parched. If it had been all in English it would have been fine, but wrestling with Japanese syllables over the loudspeaker for two straight hours had taken its toll.
On the spur of the moment I had volunteered to be the itinerant voice of Toshiyuki Ogawa's campaign, zipping around the backstreets of the district in the campaign minibus (gaisensha), proclaiming the good word from large speakers attached to the roof. In the background played the theme-tune for Ogawa's campaign, "Spring Stream", a popular children's' ditty which in Japanese is pronounced and written identically to "Spring Ogawa".
Ogawa (31) is a candidate in the Moriyama Ward City Council Elections, and his campaign has adopted a spring motif. His office, leaflets and PR truck are plastered with cherry-blossom; and the "Team Spring Ogawa" can be found traveling on bicycles with large flowery flags and music-players attached to them, traveling en masse (often led by Ogawa himself) around the neighbourhood.
At first I was highly sceptical of this overdose of 'cutesy', but in the first sunny birth-pangs of spring, it seems to be working incredibly well. Schoolchildren, old grannies and generally dour salarymen seem to be won over by Ogawa's enthusiasm and sprightly brand of direct, grass-roots campaigning.
And it is just as well Ogawa is putting in the man-hours because he is set upon on all sides. Three Liberal Democratic Party (LDP) men are up for election, and Ogawa has to persuade the electorate he is as good--or better--than either of the other two candidates in Moriyama Ward who have DPJ backing.
R J F Villar 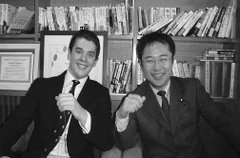